Featured Artist in May: Tim Okamura 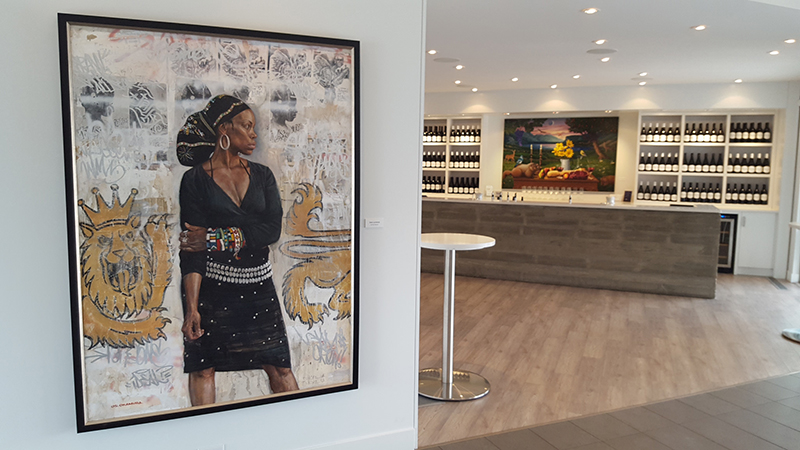 Featured Artist in May: Tim Okamura

There are five categories of painting in traditional art history: portrait, landscape, history, genre (everyday life), and still life. Tim Okamura pushes portraiture (arguably the most revered academic genre of painting) to cross its own disciplinary boundaries and to venture into the realms of street art, graffiti, urban mythology and collage. Persephone, part of the “Brooklyn Mythology” series, is a contemporary interpretation of the ancient Greek myth: the beautiful daughter of Zeus and Demeter, Persephone was abducted by Hades and brought to the underworld where she reigned as Queen and, upon her release, symbolised renewal and Spring.

Ancient Greek and Roman mythology have long assumed whiteness. Classical beauty, morality, and romantic love have been portrayed as inherently European and caucasian. Okamura’s Persephoneis a contemporary African-American woman whose gaze emanates from a strong central stance and whose traumatic past is referenced through the orange flame-like brushstrokes that call up Hades’ inferno. Persephone confronts the racial biases of history and puts forth the possibility for an emergence of oppressed histories of black female identities.

Portraiture involves a complex dynamic between the subject (sitter) of the painting, the artist, and the viewer. Feminist approaches may ask: who has the power to look and what gender, race and class power relations are revealed? The Lioness, like Persephone, denies the viewer her gaze and, with arm crossed in front of her, instead focuses to her future. The male lion stands behind her and, crowned and standing for dominance and heraldry, the king lion is in her past. In a full-body collaged portrait, The Lioness stands in courage, strength and leadership.

Okamura’s work raises an important cultural critique and provokes a question that is being asked across the disciplines of literature and the visual arts: does an individual have the right to represent another person who does not share their race, gender, class or sexuality? Do Okamura’s representations of women of colour run the risk of cultural appropriation or are they part of a productive discourse on the real lived experiences of African-American women? This question, while potentially uncomfortable, lies at the heart of Okamura’s practice. Based in Brooklyn, a borough home to diverse black communities since the 1930s, Okamura’s mixed Japanese and European descent inflects his approach as “outsider art” and potentially allows for a broadening of the rigid confines of both portraiture and urban identities.

Persephone and The Lioness will be on display at Liquidity for the month of May.